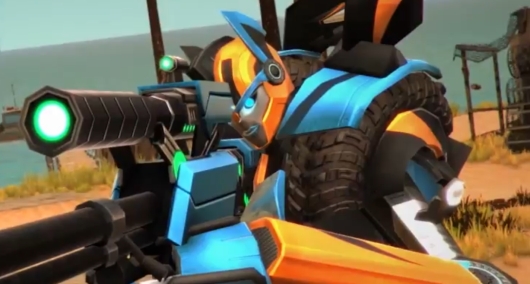 Two new warriors are being shown off by Transformers Universe today. First on the list is Catapult, an Autobot sniper with a penchant for long-ranged abilities. Catapult's core arsenal depends upon her long-range sniper rifle and electro-cloud launcher, but she also carries a shotgun for backup in close-range combat. She also heals nearby Autobots slightly each time she manages to take a Decepticon off-line, making her ranged support that much more helpful to her allies in the fray.

On the other side of the coin is Shellshock, a massive Decepticon warrior covered in heavy armor and wielding a pair of cannons and an axe. His two cannons focus on dealing shield damage or spark damage, while his axe allows him to carve up and knock down nearby enemies. Shellshock also heals nearby allies when he downs an opponent, making this behemoth a force to be reckoned with in closer engagements. To see a glimpse of both characters in action, check out the videos past the break.