An ancient evil has been slumbering beneath Senntisten Graveyard. As the Elder God Bik prepares to launch an attack on the defenders of the Cathedral, she spies an opportunity… and terror blooms.

Welcome to the third phase of the Elder God Wars Dungeon: The Croesus Front. This challenge will be unlike any you’ve faced before and contains RuneScape’s first ever skilling boss.

The Senntisten graveyard was once a peaceful place to pay respect to the long-dead citizens of the Zarosian capital. But no longer. Bik has awakened Croesus, an enormous sentient fungus that threatens to spread across the city, feasting on any organic matter in its wake. That includes you – so you’ll need to cut this mycological monster down to size before it’s too late.

There is no combat on The Croesus Front – instead, you’ll need to use your gathering skills to fight back against the encroaching gunk.

Throughout the graveyard you’ll find skilling nodes for Woodcutting, Mining, Fishing and Hunter, which will allow you to harvest fungus to concoct new consumables or repair and craft new armour. You can also feed it to the animals on your Player Owned Farm, but we won’t be held responsible for the contents of the manure pile if you do.

You’ll need at least level 88 in the respective skill to access the standard nodes, whereas the enhanced nodes will require at least level 92. There are no skill requirements to face Croesus itself, although we do recommend having at least level 80 in Woodcutting, Mining, Fishing, Hunter and Construction.

Croesus is different to any boss you’ve faced before. It cannot be killed in any way that matters – all you can do is force it back into a dormant state by summoning the spirits within the graveyard. Luckily, this encounter is massable, so you won’t be alone.

The four corners of the boss arena are home to four graves belonging to mighty heroes of the Second Age and their trophy kills. Croesus’ fungus is growing over the graves, leeching the power within. To stop it, you’ll need to work with other players and use your Woodcutting, Mining, Fishing and Hunter skills to clear the fungal matter. This will reduce Croesus’ strength, but watch out – the fungus will grow back in time, although you can slow it using Rotten Fungus you’ve already collected.

For a more permanent solution, you’ll need to restore the statues of the four heroes using the materials you gather during the encounter. Once repaired, you can pray at the statues to subdue Croesus. Once it’s been subdued, you’ll gain access to the core fungus. Destroy that, and Croesus will be restored to its dormant state… and for a time, the city will be safe.

Luckily for you, Croesus won’t deal damage – but it will try to drain your skills using its powerful attacks. Lose too many levels, and you’ll have to retreat!

Croesus is RuneScape’s first skilling boss. As such, combat skills are not required on this Front. Instead, you’ll use Mining, Woodcutting, Fishing and Hunter to gather materials and wear the not-so-fun-guy down. Construction will also come in handy, to a lesser degree.

You’ll receive XP in the appropriate skill any time you contribute towards a task, whether that’s using the skilling nodes, harvesting from the core fungus, repairing statues – or anything else!

But XP isn’t all you have to look forward to. The Croesus Front is absolutely infested with rewards.

The Cryptbloom Armor set is Tier 90 Magic tank armour, and it comes with a set effect that grows with each piece you have equipped:

The Croesus Front has a bumper crop of two new skilling off-hands – one for Woodcutting and one for Mining.

Tagga’s Core Hammer is a level 80 Mining off-hand that’ll give you +10% critical strike chance and +35 critical strike damage when equipped. When mining ores from the fungal core using Tagga’s Core Hammer, you’ll have the chance to receive Deathspore Arrowtips. The higher tier of ore, the higher the chance to get Arrowtips – and the more you’ll get! 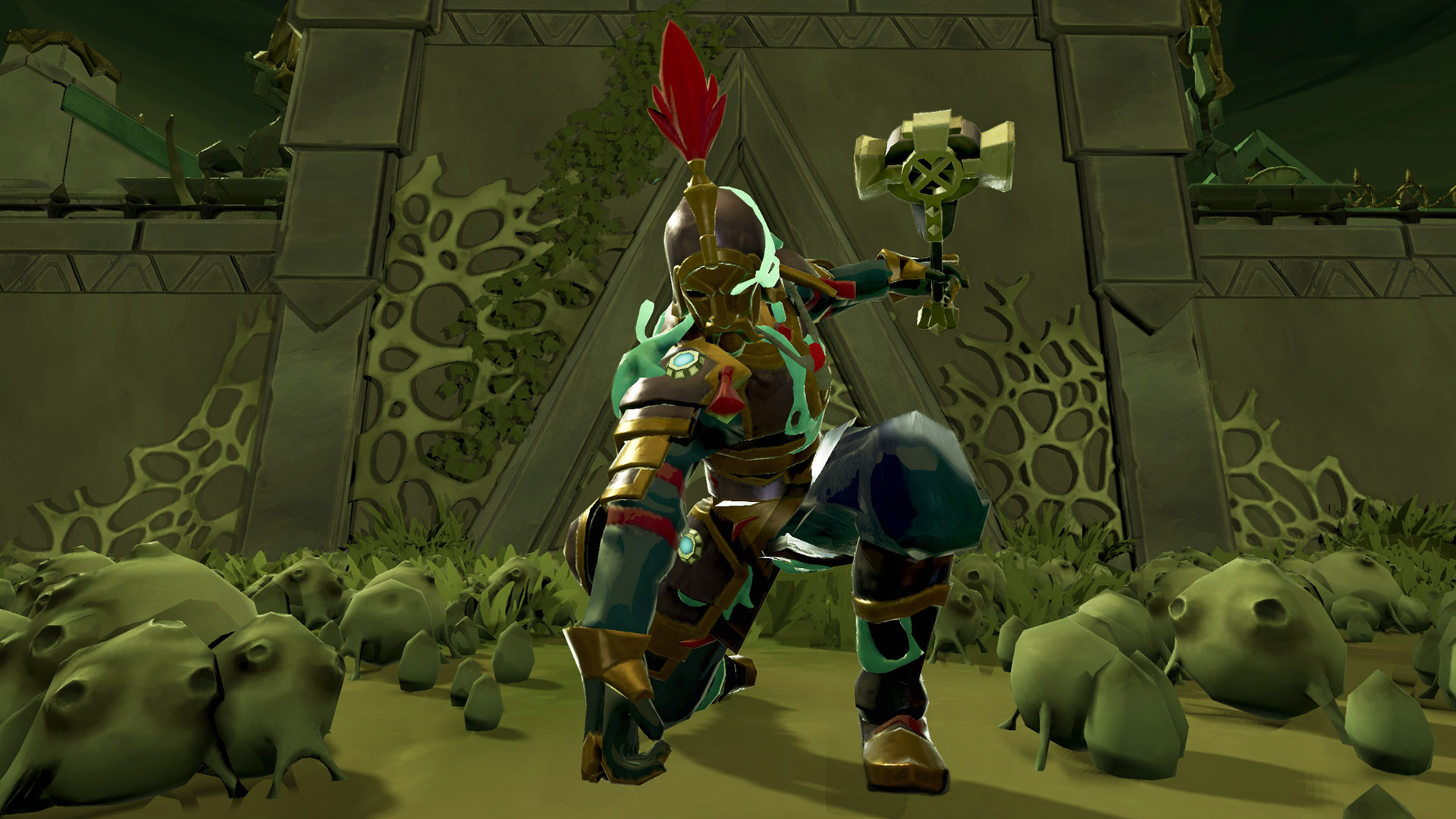 Sana’s Fyrtorch is a level 80 Woodcutting off-hand that gives you +6% success chance when Woodcutting, and 20% chance to get an extra log. When Sana’s Fyrtorch is equipped you’ll also get the chance to receive Splintering Arrowtips when chopping logs. Again, the higher the tier of log, the higher chance of receiving Arrowtips, and the more you’ll get.

While wielding either of the new skilling off-hands, you’ll have the chance to receive Splintering or Deathspore Arrowtips, which you can then craft into Arrows.

Deathspore Arrows boost your critical chance by +3%. When you crit, you’ll gain a stack of Feasting Spores. At five stacks, you’ll gain a buff which makes your next Ranged ability that would normally cost adrenaline free if you cast it within nine seconds. This effect has a 60 second cooldown, but each time you crit while using the Deathspore Arrows this cooldown is reduced by 1.8 seconds.

The Seed Bag is an item that stores up to 40 different types of seed, to their usual maximum stack. You’ll be able to craft the Seed Bag with materials you collect from the Croesus encounter – although we’re keeping mum on the exact recipe for now.

The Grasping Rune Pouch is an upgrade to your existing Rune Pouch. It holds up to four different runes and gives you a +4 bonus to Prayer. You’ll also have a 25% chance to not use runes when using combat spells.

With Croesus we introduce the scripture of Bik. 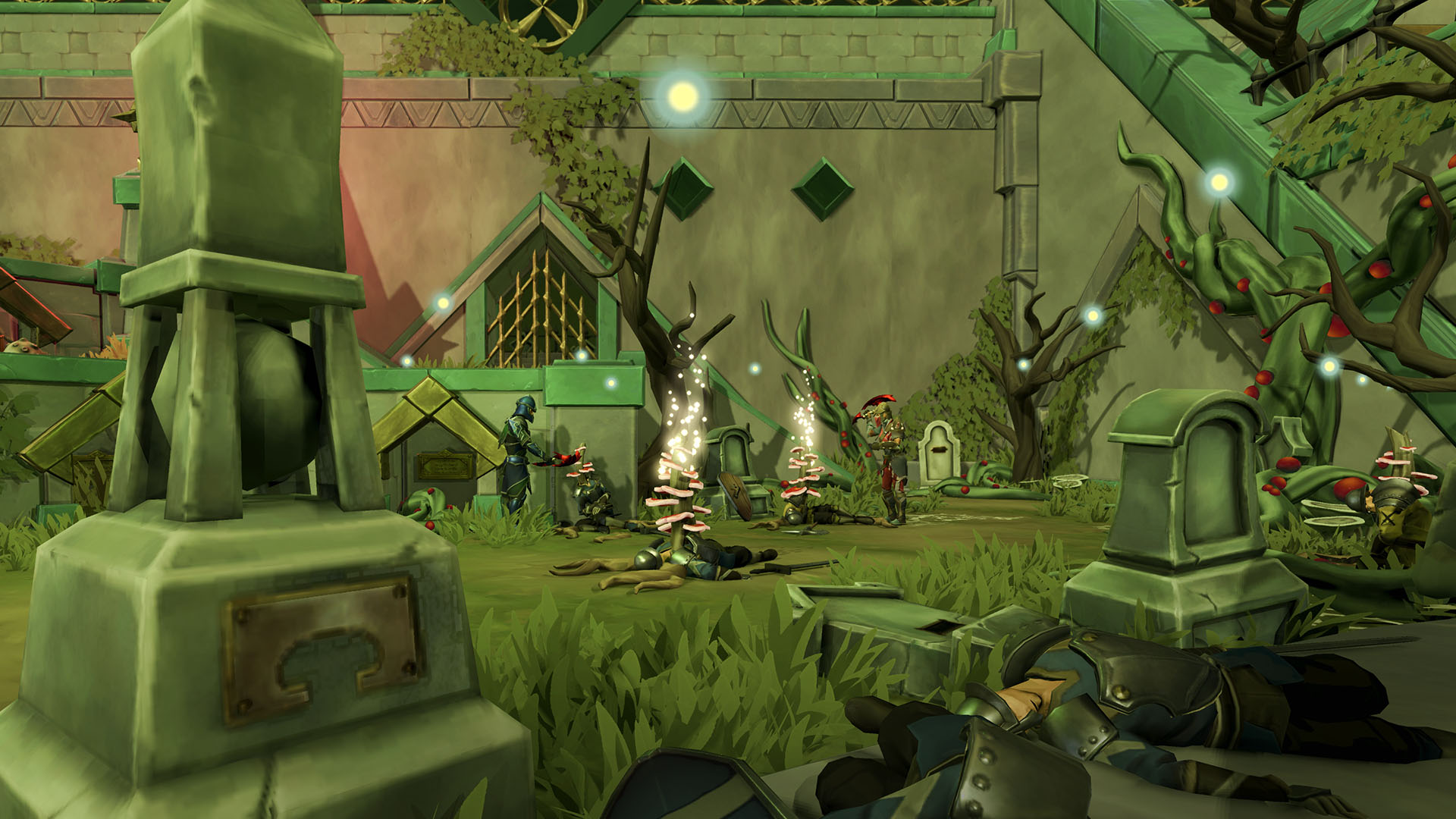 Well, the fungus is starting to eat through our keyboards, so that’s all the information you’re getting for now – but keep your eyes peeled for the Croesus Front Survival Guide, and The Croesus Front itself, which goes live on September 27th. We hope you’re prepared…