Following the results from Poll 67, we've implemented the following updates:

Pest Control now starts a game much faster if there are the full 25 complement of players in the lander. If 25 players aren't available, it'll start after 2 minutes if there are at least 5 players present, since that's the minimum. It'll also start earlier if there are 5 players and no-one else seems to be embarking. The priority system from 2007 has also been rewritten to work more reliably.

Since the release of Autocasting and Attack Style changes, you have expressed interest in understanding what each item is categorised as. The preview version we showed in the blog had the category written at the top of the screen, moving the style and Special Attack buttons down to accommodate it. Players asked us not to move the combat buttons, so we've launched it with a simpler design that doesn't move your buttons at all.

Previously, if you had an interface open such as a bank, and your Hunter trap had fallen down, it would close the interface. Now, falling Hunter traps no longer close interfaces.

After completing The Fremennik Trials, you may now enchant your Lyre from Fossegrimen for permanent lyre teleports for 1,000 Sea Turtles, Manta Rays, Sharks and Bass. This drops by 200 for each Fremennik diary completed, however, she will not return any fish once you've completed a higher tier of the diary. Fossegrimen will accept noted and un-noted versions of the raw fish and will inform you of how many pieces of fish you still need to give her in order to unlock the Infinite Lyre Teleport.

Hosidius Improvements
Following the release of the Hosidius Rework, we've made some improvements to various content within the city. You can find the changes below:

PvP Poll Results
On Friday, the 24th of May we released a PvP poll based on the following PvP Blog. We are delighted to announce the results of that poll below: 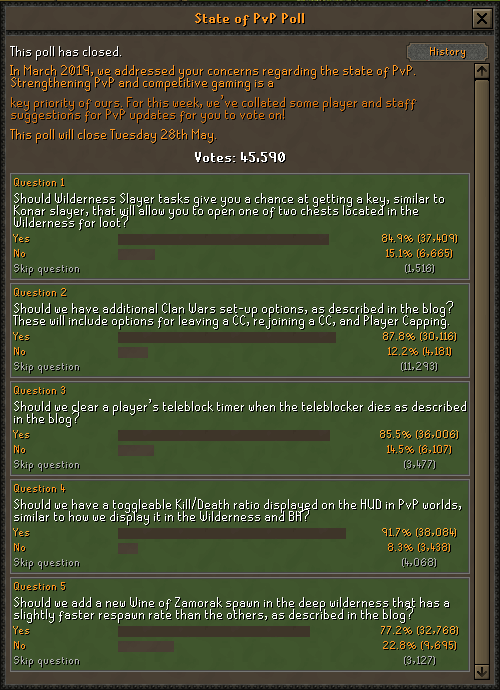 We would like to thank those that took the time to vote in the poll. You can view the results yourself in-game by visiting any nearby poll booth. We have started development on the integrity changes that were listed in the State of PvP Blog and hope to have some out next update. We want to continue to do PvP cabals with various members of the community including ex-pvpers, clan pvpers, and solo pvpers. This combined with future PvP blogs will allow us to continue making changes and polling content for PvP in the foreseeable future.