This week we’ve traded in our usual patches and changes to work on something very important to all of us here at Jagex HQ: RuneScape Mobile! Read on to find out about all the cool tech stuff we’ve been doing to make the mobile experience the best it can be.

As you all know, we’re currently working on porting RuneScape to mobile platforms, and we thought we’d take this time to show all you eager beavers what kind of progress we’ve been making recently.

Whilst we all love the current RuneScape UI, the move to mobile was a great opportunity to explore other options that are better suited to smaller screens. Remember: this is only a beta, and we’re really keen to hear your feedback and suggestions on the new look UI.

So without further ado, let’s take a look!

First of all we have a brand new home menu:

In-game, you can see that the UI is less cluttered, and there’s a new location pointer to help first-time players find their way: 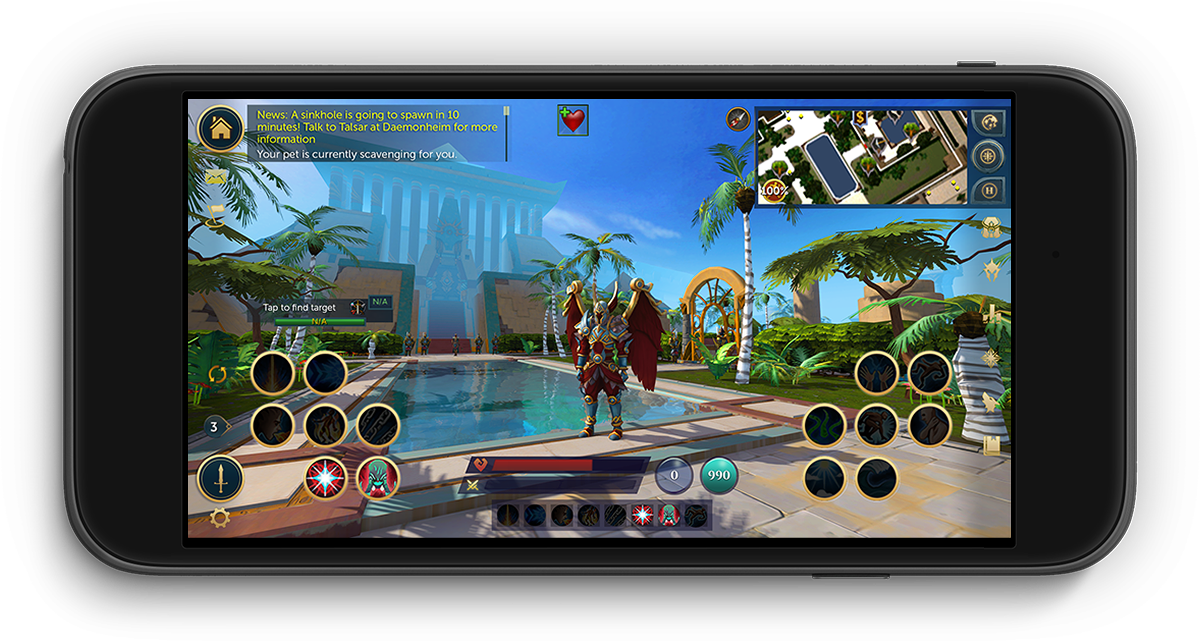 To tell us what you think about the new UI, get in touch on the forums, Discord, or the dedicated Reddit thread.

Porting to a new system means that some features will have to be upgraded – and the good news is, they’ll be better on desktop versions of the game, too.

You might remember the Buff Bar from our mobile update blog back in June. We’ve expanded upon the changes we made then and incorporated some of your feedback into the design.

The biggest change is that buffs and debuffs will now be prioritised according to their importance. On mobile, there is only room for four buffs and debuffs to be shown – so we wanted to make sure that those four icons are the ones most relevant to the player. On desktop, you can still display up to 50 buffs or debuffs.

You might also notice that the buff bar can no longer be dragged into position. You can still change the position of the buff bar via the 'edit layout mode' in the options menu.

To celebrate the new buff bar changes, we’ve given everyone three new action bars. These bars are tied to your account, so they’ll be available on both desktop and mobile versions of the game.

An eat food ability has been added to the Constitution skillbook which will consume the first item of food in a player’s backpack – use this one with caution!

Have you ever felt that scrolling through the whole prayer list is a bit of a drag? Well, do we have the solution for you! Now, you’ll be able to apply a filter which hides any prayers you don’t meet the requirements for, making your options much more streamlined.

You can also choose to only see your active prayer, which will use even less screen space.

The new activity tracker lets you track up to 5 different goals at the same time. These goals might be quests, progress towards an achievement, DnDs, daily challenges, or steps on achievement paths – more on those later.

One of our major aims has been to make RuneScape Mobile run as fast and as smoothly as we can. To do this, we’ve made some big technical upgrades.

Significant changes have been made to the way the cache loads and saves information: the cache as a whole is now much smarter and takes different factors into consideration when deciding which information to load and save.

Thanks to upgrades like these the performance speeds have risen exponentially. These mobile upgrades have also positively impacted the desktop version of the game.

Do you remember the first time you arrived in Burthorpe and started fighting back against the troll menace? It’s an iconic part of RuneScape, and that’s why it’s so important to us that it stands out for new users and encourages them to keep playing.

The most noticeable change is that Burthorpe and Taverley are being made into more distinct places, and both have undergone a thorough spring cleaning to reduce visual clutter and make them less overwhelming for new players.

Firstly, a small forest will be planted between the two towns, returning them to the distinctive zones they were before Troll Warzone.

Burthorpe in particular has become a mishmash of different architectural styles. The new map will coalesce these styles into three distinct modules: the Burthorpe town centre has room to breathe, the new imperial guard training camp attached to Burthorpe castle brings back some of the gritty, gloomy mood of Troll Warzone, while holding the line to defend the gnome social hub and southern farmlands.

The animals of Burthorpe have also been graphically updated, and the wolves have withdrawn to White Wolf Mountain, having eaten their fill of tasty gnomes.

The number of skill tutors in both towns has been reduced, and those that have been removed have been placed in more appropriate areas. For example, the construction tutor will now hang out at the Rimmington house portal. In other cases, tutors have been combined to provide instruction for multiple skills.

Tutor shops have been cleaned up, so they will no longer attempt to sell tools that are provided to players in their default toolbelt, for example.

Fnally, skill tutors will no longer provide their own challenges, which gave no rewards and, because of their overhead icons, were frequently mistaken for typical MMO quests by new players.

Another major change is that the path system has been replaced by achievement paths. These small, quick tasks should hopefully achieve the sweet spot between tutorialising the core mechanics, honestly portraying the essence of RuneScape, and not overwhelming a new player with information and options.

Upon leaving Tutorial Island, new players will be directed to Turael, who will give them tasks which place their skills from the island into the context of the wider game. These tasks will gradually ramp in difficulty until the player is equipped with the knowledge they need to fully experience what RuneScape has to offer.

The achievement path system also allows for a collection of ‘path books’ which will break the lists of tasks down into manageable chunks centred around particular locations. Burthorpe and Taverley books are available for new players, and Lumbridge also has its own dedicated path book.  Tutorial Island also has its own achievement path, to familiarise new and old players alike with the system.

The trolls in the Burthorpe troll cave now hit harder and are a bit more tough, to encourage new players to properly prepare for fighting them.

Ashdale Tutorial and A Shadow Over Ashdale

Here’s a fun fact: did you know that if you previously logged out during the Ashdale tutorial when it was available, you’d be forced to complete it when you log back in?

Wondering how to access A Shadow over Ashdale? Gudrik and his ship have moved south to the sunny shores of Port Sarim, where he’ll be available for all your questing needs.

Yes, you read that right! We’ve seen your interest in an iOS beta for RuneScape mobile and we’re happy to say that good progress is being made on that front. However, there’s still a little bit more work to do before we’re ready to present the iOS beta to you all.

So, stay tuned for the next mobile update – and remember, your feedback at these early stages is vital, so keep the conversation going on the forums, on Discord, and on the dedicated Reddit thread.

It’s a special edition! Since this week has been mobile-focused, we thought we’d give you some insight into some of the smaller, less exciting changes we’ve made to the mobile version of the game:

Made text use the correct skin colour on the following interfaces:

We’ve once again partnered with Twitch to bring you some exclusive loot! Whilst active, Twitch Prime members can grab some free loot, including some exclusive outfit pieces!

This month, each and every one of you who’s a Twitch Prime member can grab a free Premium Currency Pack (200 RuneCoins, 15 Keys, 40 Hearts of Ice). How to redeem your gains? Simple, follow the link below and make sure you follow all steps of the process.

RuneFest 2019 will be a blast from the very distant past as visitors take a dangerous journey into The Land Out of Time. Expect dinosaurs! And carnivorous player-eating plants! As you’re travelling around a real-life slice of the island you can look forward to hands-on time with new content, talks and meetups with the JMods, loads of panels, a dedicated LAN area, an art area for meeting the creative teams and of course some very big surprise announcements on the main stage. We’re also bringing back skill chips!

Kerapac the Dragonkin will be coming alive at RuneFest 2019! We’re happy to announce that we’re partnered with WillowCreative who’s crafting an amazing cosplay of Kerapac – that she’ll unveil in full at RuneFest! Here are some words from her to mark the first step of this collaboration: “Very excited to be portraying an actual dragon soon and I can’t wait to show you what else I've planned for him. Here you see a new animatronic wingframe and the aluminum stilts I already developed for a previous cosplay and Kerapac (the main reason why I wanted to build durable and multifunctional frames)”.

Our Facebook fans can now enjoy a whole new RuneScape experience: the RS Companion! Whether you want to get the best out of the Land Out of Time with some quick info, explore helpful Guides displayed in the Grand Library, never miss future announcements around RS Mobile or RuneFest 2019, grab exclusive Membership offers (even free stuff!) or need Support, the Facebook Companion has your back!

Our live streams are always a great opportunity to grab some awesome in-game prizes. And as our first adventurers set foot on Land Out of Time (or as we call it “LOoT”), we thought you’d like an update of the LootScape. Ok, roll the drums and behold… our LOoTScape!

This month, each and every RuneScape stream watched will give you a random drop from one of the following:

September is one exciting month of “calm” before the RuneFest storm with Burthorpe and Taverley getting a face-lift, the September Raffle, the Slayer Log, the Bank Placeholders on the horizon and other bits of content. It’s also the opportunity for you to take part in our development plans for RuneScape as we’ve released the Annual Survey and are about to launch a new video series of Developer Diaries.

So for this Month Ahead Q&A, we’re back on the sofas to give you an overview of all the content coming this September, and give you some insight on what you can expect to see in the months to come. We’ll also show you the new RS Mobile interface, and reveal the RuneFest schedule! No spoilers though, for that you’ll have to wait for the 4th & 5th of October!

This week, our featured streamer is Scardyginge! Join her for a special bossing session, including the Kalphite Queen, Vindicta and Twin Furies masses, and more!

This featured stream is also an opportunity to grab a LootScape! That’s right, you can now receive in-game loot when you watch a RuneScape streamer. It works exactly the same way as our official streams, just watch Scardyginge’s stream on (her Twitch channel) and you’ll receive the LootScape the following day.

Of course, adventures continue in Gielinor even when we're too busy (PKing) creating the adventures of tomorrow. Our PMods are here to welcome you in a range of PvM Boss Masses, Events and Q&As each week. Check out all the community events organised by the Pink Skirts on their official schedule here.