Graphical Changes
In the day one report following the release of the quest, we discussed Elena's chathead. This was later polled, and consequently changed to a version that is made up of elements from both the original and new styles. In the same blog, we mentioned plans to poll other changes regarding the style of the elves as well. The questions below will be opinion questions rather than standard 75% Pass/Fail poll questions. This means we will choose the most popular results and implement them accordingly.

We're not offering to revert all elf models back to their originals because we'd like to maintain a consistency in style. Many of the elves introduced with Song of the Elves were brand new so their current appearances are their original versions.

Similar to the compromise version of the Elena chathead which has been implemented in game, we propose a less detailed version of the elven chatheads. Lord Iorwerth's chathead is used below as an example to show the style that would be applied to all elves if it is chosen. Features such as the eyebrows and cheekbones are less prominent in the proposed chathead style, reducing the level of detail.

Poll Question #2
Which style of chathead do you prefer from options A, and B, as shown in the poll blog? If the proposed style is more popular than the current one, it will be applied to all elves in the game.
In regards to Lord Iorwerth's model, we received feedback that it was too detailed in terms of shading and that the colour scheme lent itself to making him appear evil. In response to this feedback, we would like the propose a model (B) that addresses these issues. The proposed model has reduced shading and a blue color scheme. Detail in the face was also reduced. To give a full range of choice, we're also offering another model (C) which has been further reduced in detail from the existing one. It has had the robes and shoulder armour removed and the chest proportions changed, making the character less imposing.

Unlike the chathead style question above which would be applied to all elves, this question refers to the model of Lord Iorwerth only. The vast majority of feedback gathered referred to the chatheads of Elena and the elves while feedback around the models was centered around Lord Iorwerth specifically.

Option A - the current model


Poll Question #3
Which version of Lord Iorwerth's model do you prefer from options A, B, and C as shown in the poll blog? The most popular choice will be Lord Iorwerth's appearance throughout the elven questline.
Priestess Zul-Gwenwynig

The chathead and model for Priestess Zul-Gwenwynig were changed accidentally when the Song of the Elves update launched, comprising of different 'kits' that other elf models use. To fix this issue, her model will be changed to be more similar to the original and her chathead will be changed according to the style that is most popular in question #2.

Based on feedback to the Dragonstone armour received as a potential reward from the enhanced crystal chest, we would like to offer a different appearance. Many of you felt that the armour was too detailed and intricate to fit the Old School feel. In response, we are offering a version with reduced detail and shading. 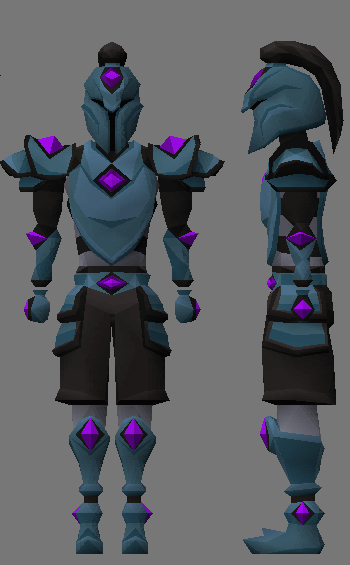 Option A - The current model 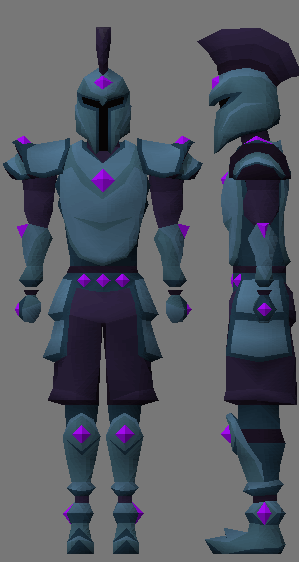 Option B - The proposed model
Poll Question #4
Which version of Dragonstone armour do you prefer from options A and B as shown in the poll blog?
Crystal Equipment Charges

The most popular feedback regarding the Blade of Saeldor is that the charges run out too quickly. This means the time spent acquiring crystal shards and charging the weapons is too high relative to how long the sword can be used for. The initial pitch, which included the current capacity, was offered when the sword also included a special attack. Since no special attack was added, we think it might be the right time to revisit its charges. After discussing this internally, we decided we would like to standardise the max charge capacity of all crystal items. With this in mind and in response to your feedback, we intend to poll the following two questions:


Poll Question #5
Should the total number of charges held by all crystal items be changed to 20,000? This would include the new Blade of Saeldor and Crystal armours.
Poll Question #6
Should the amount of charges provided to the Blade of Saeldor by each Crystal shard be increased from 25 to 100?
The Iorwerth Dungeon
We would like to offer to increase the level of the monsters found in the Iorwerth dungeon for those who wish to train Slayer there. Doing so will mean they award more experience per kill as they'll have higher hitpoints.


Poll Question #7
Should the creatures found in the Iorwerth Dungeon be levelled up to match the kinds currently found in the Catacombs of Kourend?
Let us know what you think of the proposed changes ahead of the poll which is due to open tomorrow on Friday (August 9th) and close on Tuesday (August 12th). Once the graphical changes have been decided and implemented, we won't look to make any further changes to the appearance of Song of the Elves related content as we move on to upcoming projects. Thank you all for your feedback!