At the risk of dredging up bad feelings about a certain 8th Season, we’d like to remind you all that winter is coming. Yes, those halcyon summer days are coming to a close, and there’s no better way to acclimatise yourself to the encroaching chill than to shut yourself indoors and snuggle up with your favourite MMO. Right? This week, learn how you can make your Summer Escape, find out the results of the Spectacular Summer Skill Off, and check out a few small changes we’ve made to Anachronia.

Make your summer escape (read: ‘your escape from summer’) with this 4-part series of weeklong skilling buffs! It works just like Winter Weekends, only bigger, better, and uh – buff-ier? Here’s the deets on the weeks:

After the game update on August 5th to 23:59 on August 11th, every non-combat skill will receive a variety of boosts and buffs:

Week two, which runs from 00:00 on August 12th to 23:59 on August 18th, focuses on Combat and Slayer. The following boosts will be in effect across the gameworld for the entire week:

Week 3 runs from 00:00 on August 19th to 23:59 on August 25th. This time around, Dungeoneering is in the spotlight, and for the more adventurous among you, the three Elite Dungeons will have their own set of bonuses:

Finally, between 00:00 on August 26th to 23:59 on September 1st, everyone’s favourite dinosaur-infested landmass will be receiving buffs across the board. Various Anachronian activities will receive the following buffs:

In addition to the above buffs, there will be further bonuses on weekends from 12:00 On friday to 11:59 on Monday:

You can look forward to a number of exciting occurrences throughout the event period, including balloon drops at selected lodestones throughout the world. These balloons contain a multitude of items, including Silverhawk feathers, summery snacks, and medium prismatic lamps.

Last but not least, the keen ranchers among you will be pleased to hear that Player Owned Farms are getting the following bonuses all throughout the event:

We’re still keeping tabs on Anachronia and making small changes to improve your island experience. For example, this week we’ve adjusted the flags throughout Anachronia so that they wiggle in the wind. Lovely.

You can find all the Anachronia changes in the patch notes.

Gielinor’s first ever summer skill-off has come to a close. The snack yaks are packed, the accursed swords have been distributed, and your fabulous host has returned to the dank pit from which he came. But there’s still one question left to answer… which skill won?!

*ahem* drumroll please! We can now announce that the winning skill of the inaugural Spectacular Summer Skill Off is…!

DUNGEONEERING! We’re hole-y surprised by this one. When we first got the PITch for the dungeoneering booth, we really thought it’d be a bit too deep for you guys. But hey – we’re glad we caved in in the end!

Are we done? We’re done. Congratulations, Dungeoneers! Hopefully none of you left anything too important down there.

All Players, excluding Ironmen, will receive Double Daily Oddments on Treasure Hunter Rewards every Wednesday in the Month of August! Enjoy!

RuneFest 2019 will be a blast from the very distant past as visitors take a dangerous journey into The Land Out of Time. Expect dinosaurs! And carnivorous player-eating plants! As you’re travelling around a real-life slice of the island you can look forward to hands-on time with new content, talks and meetups with the JMods, loads of panels, a dedicated LAN area, an art area for meeting the creative teams and of course some very big surprise announcements on the main stage. We’re also bringing back skill chips!

This year’s explosive design is inspired by the majestic volcano that can be found on both Fossil Island and the Land Out of Time. It’s the perfect thing to wear while you’re roaming the prehistoric jungle and excavating fossils at RuneFest– or while you’re hacking through the weeds in your own back garden. We don’t judge.

If you’ve already bought your ticket for RuneFest 2019, we’ve sent you an email with further instructions. Check your mailbox! If you haven’t bought your RuneFest ticket yet, just head to Eventbrite and you’ll be able to add your precious loot to your order before checkout. 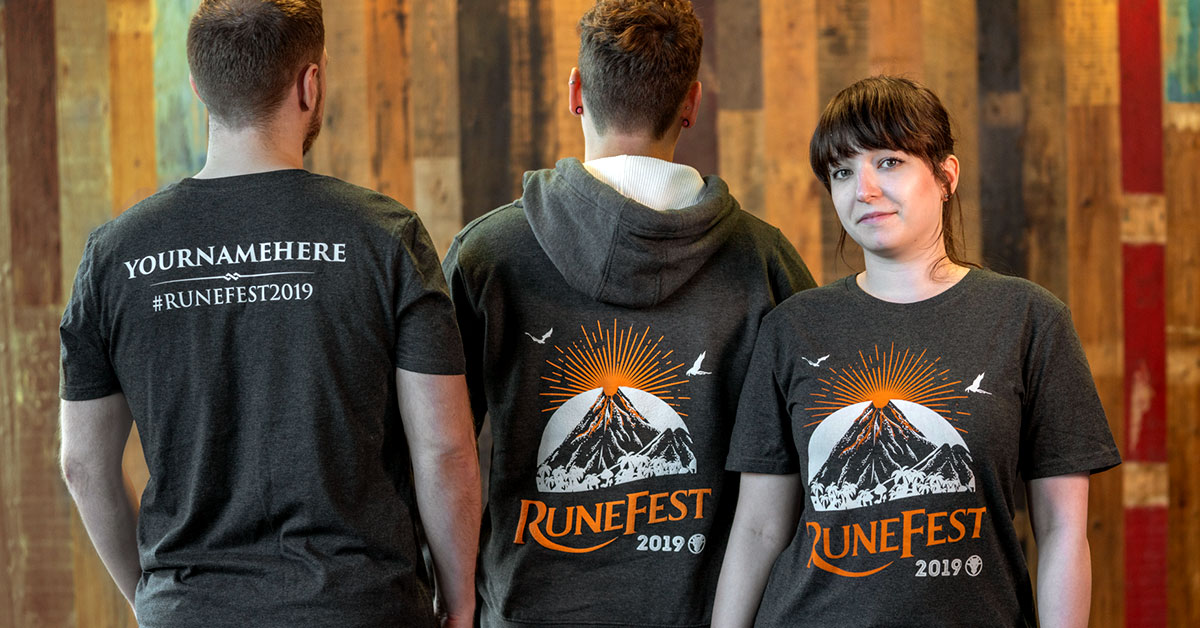 As you get ready for the big weekend, check out the Official RuneFest 2019 tees and hoodies now available to pre-order on Eventbrite! This year’s explosive design is inspired by the majestic volcano that can be found on both Fossil Island and The Land Out of Time.

Pre-orders close at midnight on Sunday August 18th (GMT). People who purchase a ticket to RuneFest after this date will not be able to pre-order merch.

We just want to give you a quick heads up on the Player Gallery competition that we’ve run in the past weeks to celebrate the launch of the Land Out of Time. First, we would like to thank all of you who entered the competition. We have never seen such amazing entries and choosing winners has never been so difficult!

This is why, even though we first thought that we would announce the winners on… well, today; sorting all entries and picking our favourites is quite tricky and we will need a few extra days to do so. We’re sure you understand this is not a decision we want to rush. Therefore, we will announce all winners on Monday 12th August!

Our Facebook fans can now enjoy a whole new RuneScape experience: the RS Companion! Whether you want to get the best out of the Land Out of Time with some quick info, explore helpful Guides displayed in the Grand Library, never miss future announcements around RS Mobile or RuneFest 2019, grab exclusive Membership offers (even free stuff!) or need Support, the RuneScape Companion has your back!

The RuneScape Companion is still young and we want to make it the best experience possible with your help! Don’t hesitate to share your feedback on Facebook and other channels.

Our live streams are always a great opportunity to grab some awesome in-game prizes. And as our first adventurers set foot on Land Out of Time (or as we call it “LOoT”), we thought you’d like an update of the LootScape. Ok, roll the drums and behold… our LOoTScape!

This month, each and every RuneScape stream watched will give you a random drop from one of the following:

It’s a full-packed month of August we just entered in Gielinor!! With the Bank Improvements & Weapon Diversity beta happening as we write these lines, the fresh launch of our Summer Escapes skilling frenzy, the Anachronian Clan Cup on the horizon, Mod Osborne’s Dev Blogs and the annual survey winging its way to you – this Month Ahead Q&A is going to be quite epic!

Oh also, your sharp eye might have noticed this “RuneScape Quiz” hanging in the title, right? Well, our CM team has cooked something quite exciting just for you. The very first interactive RS Quiz! You think you know everything about RuneScape? EVERYTHING? Let’s test your skills, and you better study the RS Wiki. Rewards? Jeez, talk about loot hunters. Hum ok, there will be prizes (in-game and IRL), but for the very best!

This week, our featured streamer is Cryo! Join him for a good ol’ PvM session of Boss Massing!

This featured stream is also an opportunity to grab a LootScape! That’s right, you can now receive in-game loot when you watch a RuneScape streamer. It works exactly the same way as our official streams, just watch Cryo’s stream on (his Twitch channel) and you’ll receive the LootScape the following day.

Our resident PvM expert Mod Lee knows no fear and he’s ready to take you all on another round of boss mass. From Vorago to the Kalphite King, the Corporeal Beast, the Angel of Death, if you’ve got a set to complete, an achievement to unlock, or simply want to hang out with friends and slay some, this is the place and time!