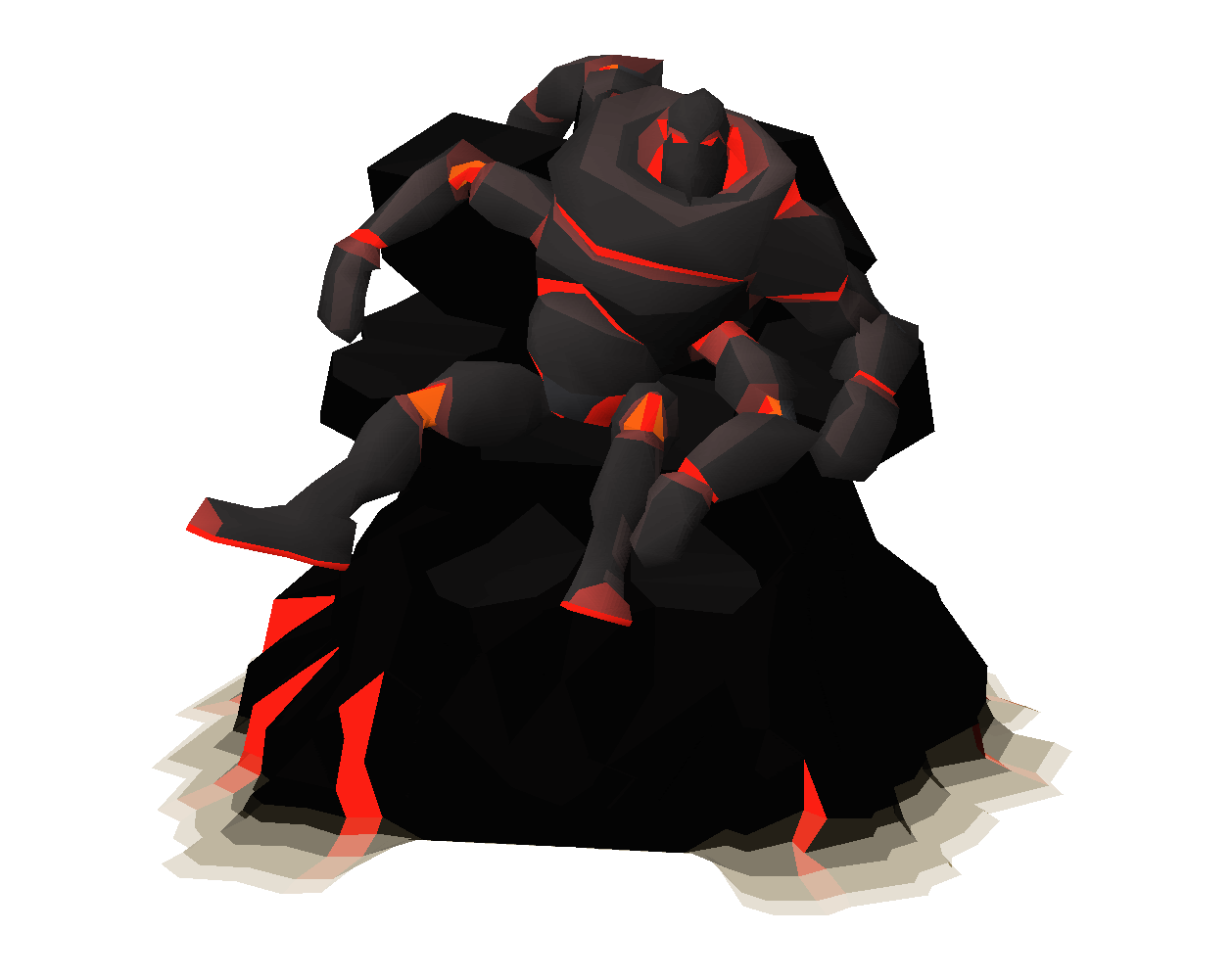 Of all the races on Gielinor, few are as fascinating as the TzHaar. Despite appearances, these ancient beings of obsidian and magma are mostly peaceful. That said, they have a love for combat that few can rival.

Due to their unique biology, it isn't practical for the TzHaar to leave their home of Mor Ul Rek for long periods. However, they have heard plenty of stories about the overworld from visiting JalYt. One TzHaar in particular, a member of the hunter class called TzHaar-Xil-Bak, has been keenly gathering tales of the great and powerful creatures that roam the world above.

Although fascinated by the powerful beings of the overworld, they also trouble TzHaar-Xil-Bak. The TzHaar are some of the greatest fighters in the world, but they have never had the chance to prove their worth against these opponents. TzHaar-Xil-Bak is keen to rectify this issue, but being unable to leave his home he cannot do it himself. Instead, he needs a representative. Someone who, despite not being TzHaar, fights with the strength of one. He needs you.

This new Slayer Master will have the following requirements.

This Slayer Master will have its own separate task system:

This Slayer Master will offer the following bosses as tasks, all with their own specific weighting. There will be eligibility requirements for each (for example, you will still need 87 Slayer to get a Kraken Task).

Currently tasks that have boss alternatives vary in time significantly. For instance, the Hellhound Task could take anywhere from 3-7 hours to complete depending on your gear and efficiency, and Hydra Tasks can also take a similarly extremely long time.

The goal is for the new Boss Tasks to take 2-3 hours to complete - this is to avoid the monotony a single boss task can bring, as well as to help balance the points per hour.

This Slayer Master will have its own store with a separate points system. It will offer unique rewards and features unique task interactions, such as storing and picking tasks. It will also offer task skips, task blocks and the chance to extend tasks.

It will also offer some of the same rewards as other Slayer Masters, such as:

The ability to store a task is something that's been previously requested by players. Sometimes you get a task you want to do, but just don't want to do at that moment in time.

Storing the task means you can spend some points to 'bank' it for later, and then retrieve it at a more convenient time.

You would only ever be able to store your current Boss Task with this, and not a task from other Slayer Masters.

This sounds crazy powerful, right? That's because it is!

What about those times when you are in the mood for a specific boss? Unless you have hundreds, maybe even thousands, of points spare, you simply cannot guarantee you will get a particular task.

The alternative to this is currently for people to skip tasks with Turael repeatedly, meaning they have to do 20+ low-level tasks like killing bats or slimes... which is not a good experience. Task picking will hopefully remove this problem!

This would cost a decent amount of points, so won't be available very often, but hopefully not too many so as to feel not worth it. This is a chance to guarantee that you can get your desired task in a set amount of time, and free you from the gods of RNG!

This Slayer Master could offer some exclusive tasks as optional unlocks, adding some variety and challenge to Boss Slayer. These include:


We expect a lot of discussion about the last one, as a Raids Slayer Task is unique and potentially contentious.

This Slayer Master would have its own global-tertiary role, akin to Konar.

Currently we want to propose some potential rewards for this - we'll choose the ones you are most happy with. 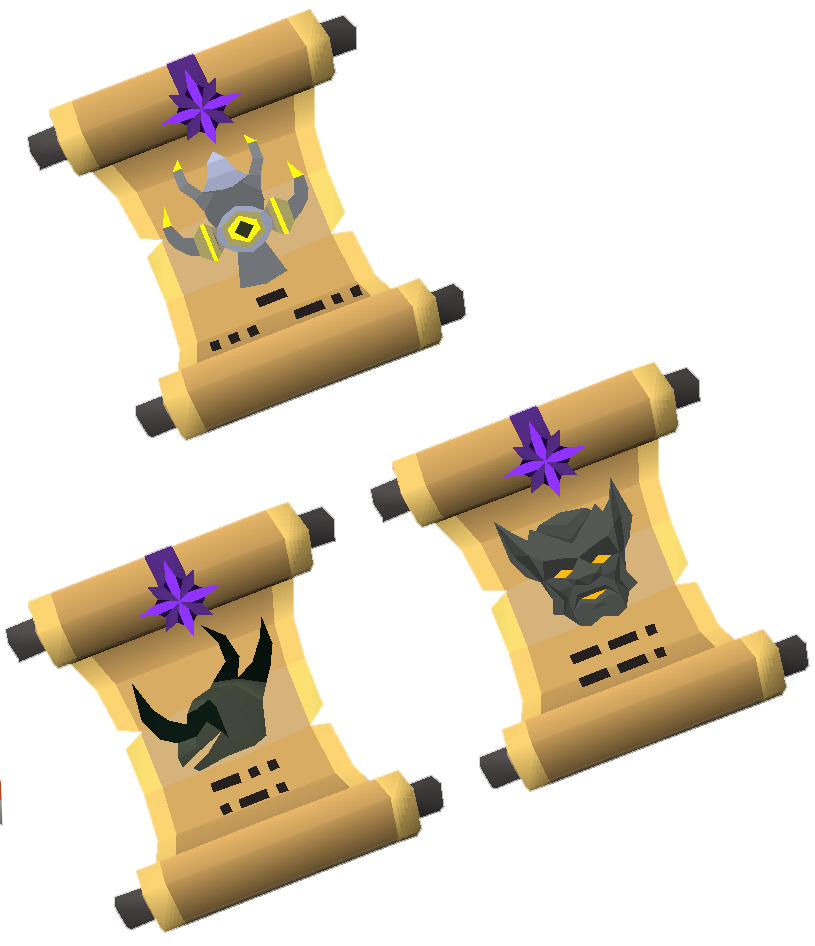 Every appropriate boss would have a rare chance of dropping a small number of teleport scrolls. These would be untradeable, and would only be for the boss it was dropped from.

We are very aware there are some lengthy walks to some bosses. We would not want to abolish this - the hope is that these scrolls would be slightly better than the current methods.

Unlike Konar, we don't want to provide large resource drops. The goal for these drops would be to lengthen your trip slightly, possibly allowing for another 2-3 kills. 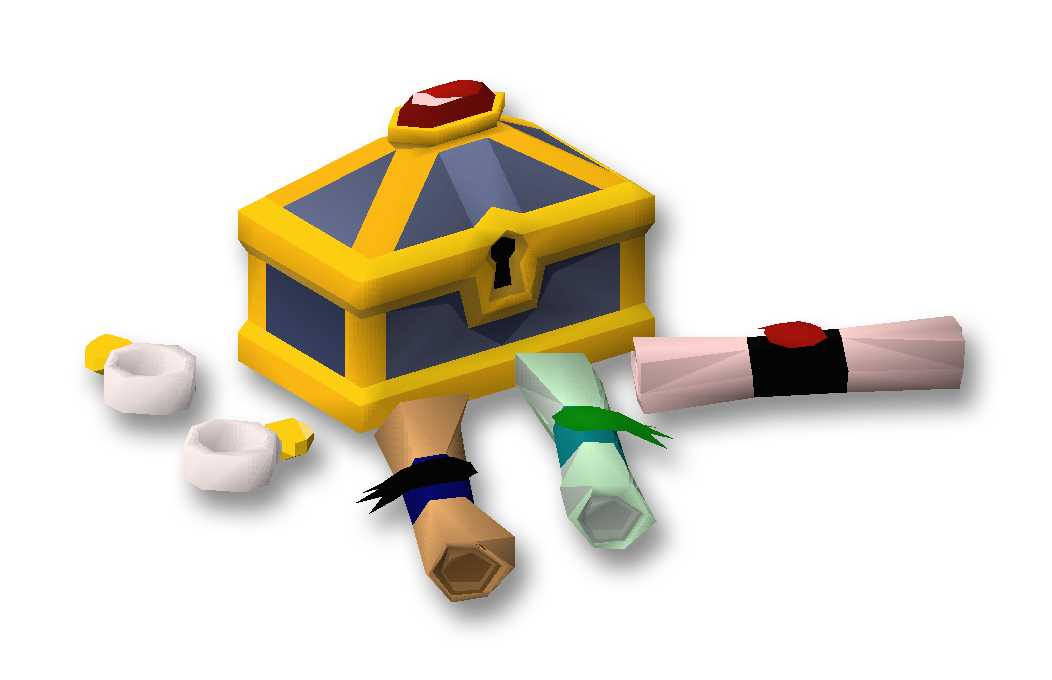 The Divine Reliquary would be a new item for the ammo slot, similar to how Blessings can go in there.

Players will be able to store up to three God Blessings into the Reliquary, providing the benefits of the blessing such as protection but will remain +1 Prayer bonus.

Whilst equipped, the Divine Reliquary will also have a 20% chance of granting you additional God Wars kill count while slaying the various minions in the God Wars dungeon.

The goal of this item is to make bossing at the God Wars Dungeon slightly more convenient, saving you potentially 1-2 inventory spaces that would normally be taken up with god items, along with slightly speeding up the time it can take to get kill count.

The Divine Reliquary would be tradeable when there are no blessings in it.

This item would be very rare on the new Slayer Master's tertiary drop table.

Let us know your thoughts about this reward! 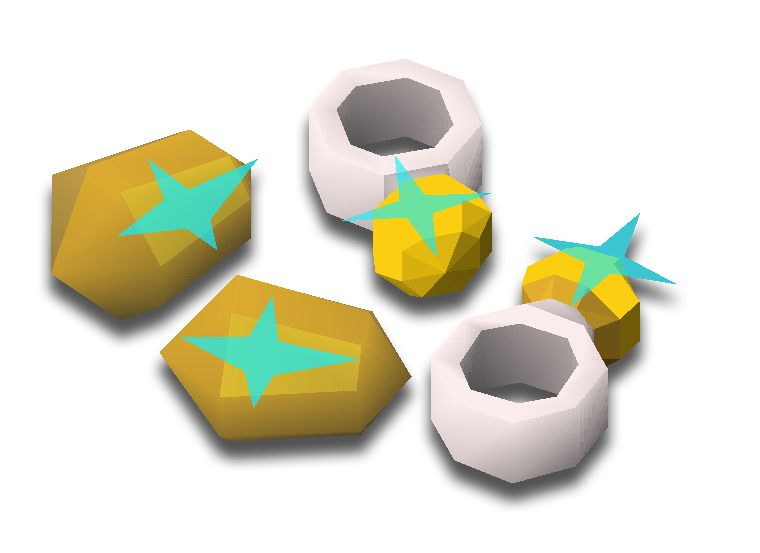 We have heard your complaints with the current rare drop table, and this is a gameplay-focused solution to that.

The Lustrous gem would be a tradeable gem that is purely for creating the Lustrous Ring. The Ring would be untradable and replace the rare drop table you have access to.

We plan for this item to be a very rare drop.

If you don't like it then shout! We are aware there are multiple solutions for it, of which this is just one. 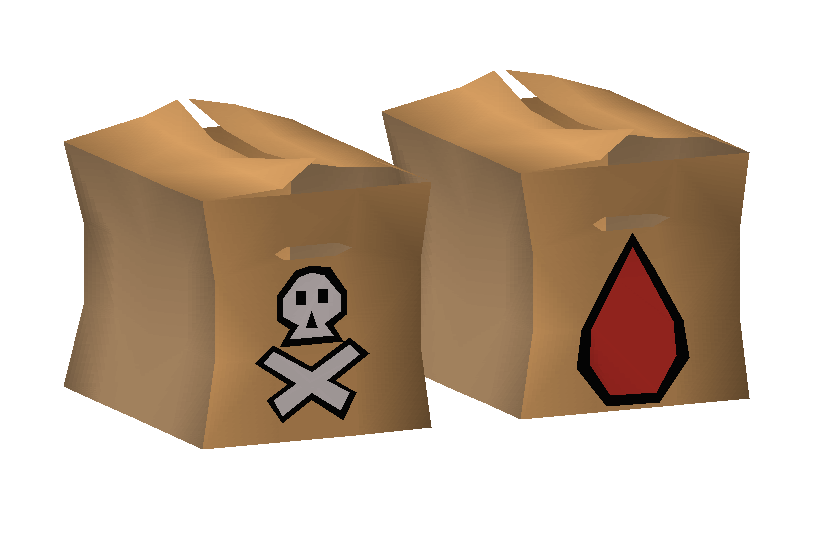 With Boss Slayer you can expect to use blood and death runes quite often, particularly with the powered staves and Scythe of Vitur.

Therefore, as a new Slayer Master store option, we would like to offer the chance to purchase these rune packs in the TzHaar store, using Tokkul, as an unlock.

This unlock would cost a high amount of Slayer points.

Why can you have two tasks at the same time?

This is to prevent people from potentially getting locked into a Boss Task they cannot realistically complete, meaning they're unable to do Slayer until the next day.

It also has the added benefit of distinctly separating it from regular Slayer, since it has a different store and points system.

If you have an Abyssal Demon Task and a boss-only Abyssal Sire Task, why would they both not register each kill?

Because if this happened it would feel necessary to provide double the Slayer XP, which is not acceptable at all. It would also create a potential meta for farming points on both Slayer Masters simultaneously.

Why can't I use Turael to skip with this master?

It has a separate task system, and a separate point system. It would be very abusable if you could skip with Turael.

Can I get a task that I have stored?

Yes, otherwise it would effectively work as an extra block.

Will Slaughter and Expeditious bracelets work on Boss Slayer tasks?

Yes, they will function like they do on regular Slayer tasks.

Words From the Developer

This will be my first proper project. I've been on the Old School team for a couple of months now and have been able to use parts of my training on the Poll 71 jobs.

This project should bring all of my training together, whilst simultaneously creating content that I hope the community will enjoy.

My goals for this project are to hopefully get more players into bossing, as well as offering a much more engaging and fulfilling experience to existing players who enjoy boss-only Slayer.

Bossing in Old School is my favourite thing to do and, if it isn't already, I hope it can be yours too!

These questions are not final, and are heavily pending feedback. Please let us know what you think.

Poll Question #1
Should we introduce a new Slayer Master in Mor Ul Rek that only assigns boss tasks ? This Slayer Master would require you to have 100 Combat and 75 Slayer.

Poll Question #2
Assuming question #1 passes, should this Slayer Master have a separate task system, allowing you to have both a normal Slayer Task and a Boss Slayer Task at the same time?

Poll Question #3
Assuming question #1 passes, since you will not be able to skip tasks with this Slayer Master by talking to Turael, should the Master provide one free skip a day to alleviate the issue of getting stuck with a task you don't want to do?

Poll Question #4
Assuming question #1 passes, should this Slayer Master allow you to pick your own Boss Slayer Task for points?

Poll Question #5
Assuming question #1 passes, should this Slayer Master allow you to 'store' one Boss Task for points? This task would only be retrievable if you do not currently have a Boss Task.

Poll Question #6
Assuming question #1 passes, should this Slayer Master allow you to block tasks for points, similar to normal Slayer Masters? There would be two block slots available.

Poll Question #7
Assuming question #1 passes, should this Slayer Master allow you to extend certain Boss Tasks for points? This would increase the minimum and maximum quantity of the boss assigned.

Poll Question #8
Assuming question #1 passes, should this Slayer Master have an optional unlock to get a low quantity of Corporeal Beast as a Slayer Task? This task would have to be completed solo and require you to use the private task-only instance.

Poll Question #9
Assuming question #1 passes, should this Slayer Master have an optional unlock to get a low quantity of The Nightmare as a Slayer Task? This task would have to be completed solo.

Poll Question #10
Assuming question #1 passes, should this Slayer Master have an optional unlock to get a low quantity of Hunllef (The Gauntlet) as a Slayer Task?

Poll Question #11
Assuming question #1 passes, should this Slayer Master have an optional unlock to get The Great Olm as a Slayer Task? This task would have to be completed solo.

Poll Question #12
Assuming question #1 passes, should this Slayer Master provide an unlock that allows the player to purchase death and blood rune packs for Tokkul? This unlock would cost a high amount of points.

Poll Question #13
Assuming question #1 passes, should this Slayer Master offer a tertiary roll for each kill on a task to give a chance of some rewards?

Poll Question #14
Assuming question #13 passes, should this Slayer Master's tasks give bosses a semi-rare chance to drop teleport scrolls that let you get to the boss slightly faster?

Poll Question #15
Assuming question #13 passes, should this Slayer Master's tasks give bosses an uncommon chance to drop a small amount of supplies, in aid of lengthening your trip?

Poll Question #18
Should having the Slayer Cape equipped or in your inventory let the player use any Slayer Master regardless of combat level restriction?

Although Boss Slayer Master is exciting future content, we are aware that you’re keen to hear about our plans for fixing existing content, particularly Bounty Hunter and Revenant Caves. Stay tuned for a blog later this week that will outline proposals for both!