Did you miss the livestream on April 30th? You can catch up on everything you missed right here, or alternatively head to the bottom of the post to watch the entire thing!

It’s Data Stream time! Mod Poerkie and Mod Spear take us through some research Jagex has done into the state of RuneScape at the moment, including which skill pets people are receiving, the popularity of the new Archaeology skill and much more

If you want to see the image in full screen, click on the image and it will open in a new tab. 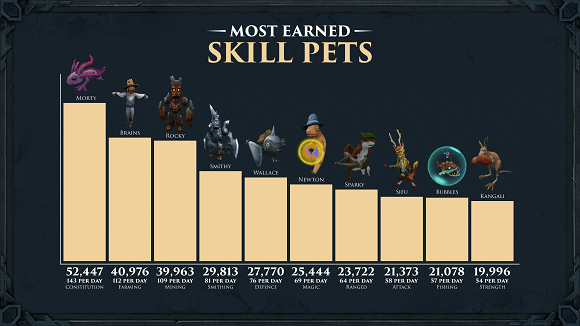 Firstly, we saw which skill pets players have earned the most. Constitution came in top place, showing that people spend their time getting hit more than anything else. Second place went to Farming, likely due to the introduction of Player-Owned farms at the end of 2018. Meanwhile, 2019’s Mining and Smithing rework is likely why the Rocky and Smithy pets were the third- and fourth-highest earned pets. 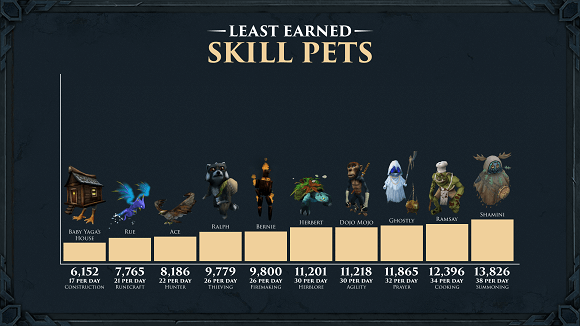 Unsurprisingly, the lowest-earned skill pets were those tied to less accessible skills. These include Construction, which is quite a grindy skill, as well as the likes of Summoning and Runecrafting, which require a lot of work. 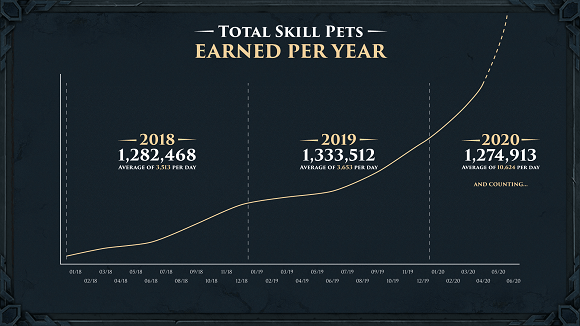 The number of skill pets earned in 2020, up until April 23rd, is already on average around three times that the amount earned during the entire of 2019. Furthermore, the total number of pets earned so far this year is almost equal to the total for 2019. With players receiving an average of 10,624 pets per day, more skill pets will have been earned this year than 2019 by April 29th. 150 skill pets have been destroyed by 113 players, meaning that some users have destroyed more than one! 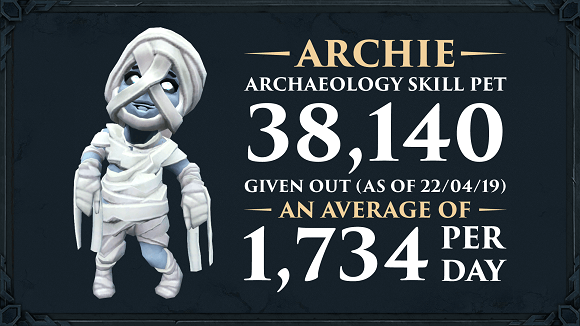 This increase in the number of skill pets being earned is partly due to the launch of Archaeology in March, with that skill’s pet, mummy’s boy Archie, proving popular with players. He was earned 38,140 times, or 1,734 per day on average. That doesn’t account for the massive spike in skill pets being earned, which is likely due to the COVID-19 coronavirus pandemic lockdown, which means people are spending more time in RuneScape. 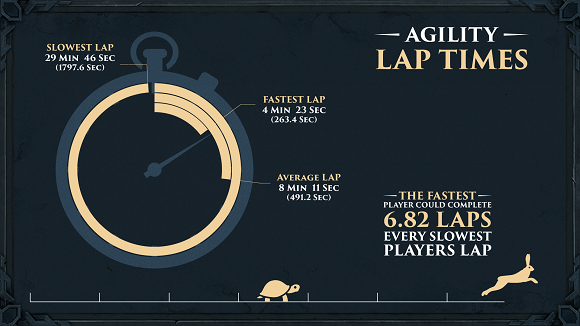 The average lap time for the Anachronia Agility course is twice that of the fastest speed recorded to date. 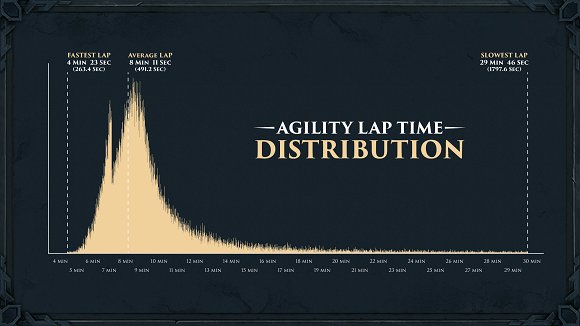 The distribution of lap times for the Anachronia Agility course isn’t a smooth bell curve like you’d expect. Normally the average is the most common, with a smooth curve on either side. This deviation is because there’s an achievement for completing the course in under seven minutes, so players will try to finish it quickly one time, before going back to a more leisurely pace. 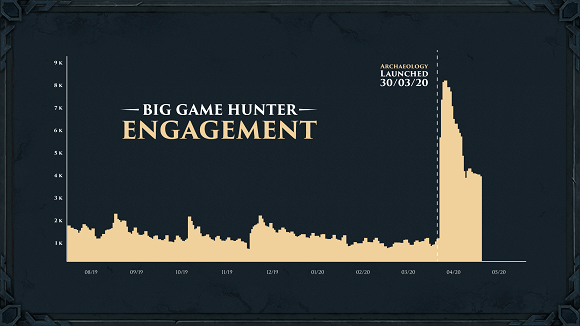 The massive spike in engagement during April 2020 is due to the launch of Archaeology, when it was revealed that the dragon mattock was dropped by Big Game Hunter shortly after the skill’s release. 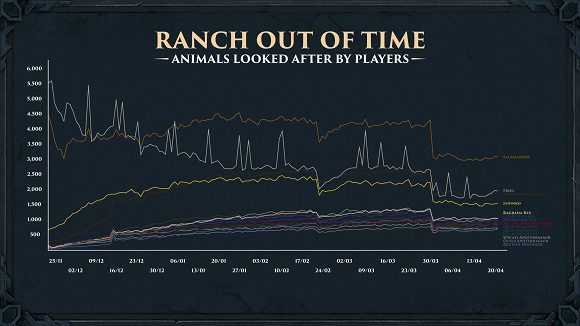 The decline in animals being looked after at The Ranch Out of Time from the end of March onwards is due to players deciding to check out the new Archaeology skill, which was released at the end of that month. The reason why frogs saw more aggressive spikes than other creatures is partly because you can keep more of them in a pen than other animals, but also because players need frog spawn to solve one of the Contract Claws mystery at the Infernal Source. 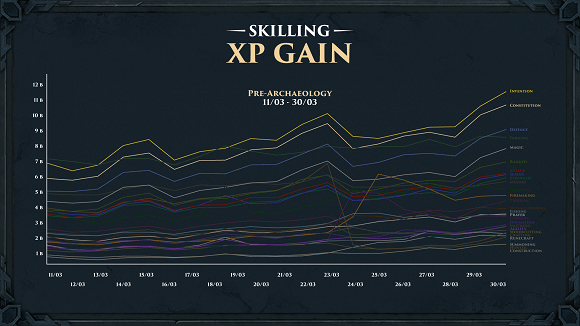 Before the launch of Archaeology, the most popular skills being trained were the usual suspects, such as Invention and Construction. Firemaking saw a spike in late March due to it being part of the Zodi-yak Track event. 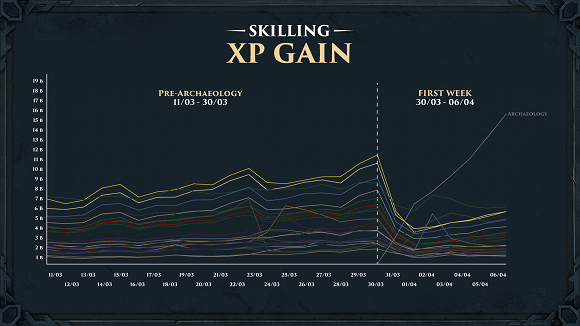 Aside from the newly-launched content, the top skill was Farming, which was due to people looking after their farms and animals. Invention and Constitution took third and fourth places. 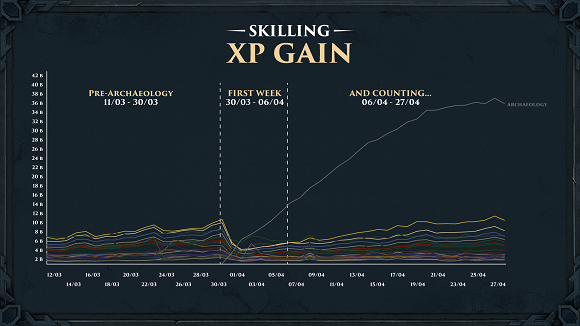 Going up until April 27th, the amount of Archaeology XP earned is more than four times every other skill combined. This is due to players coming back to check out the new release, as well as the coronavirus lockdown.

Invention was a slight increase during this period due to players levelling up mattocks as well as Ancient Invention being part of the new skill. Users were also testing out the relics that Archaeology introduced, which raised Constitution. 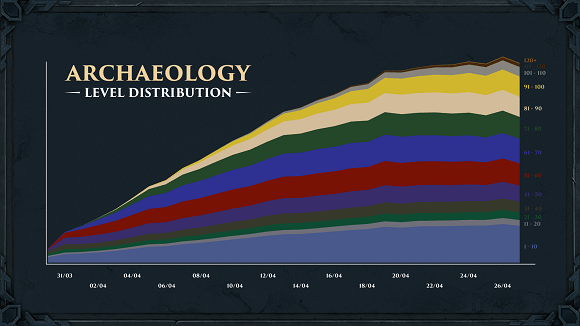 30% of active players are level 81 or higher in Archaeology. There’s still a lot of new users coming to the skill, who are currently between levels one and 10. People also don’t stay in the level 11-to-40 band for long, either, while players who make it to levels 71 blast through as there is more interesting content at this stage. 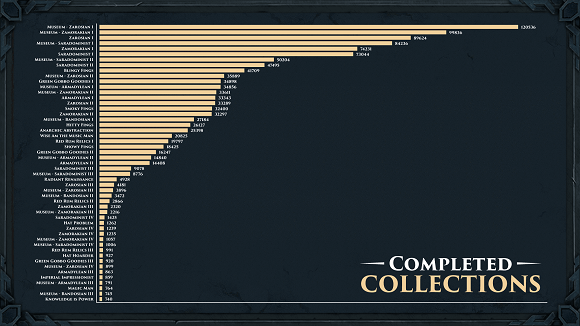 The Zarosian I collection takes the top spot as users would flood to the Kharid-et dig site when the pylons were turned on. These gave the Protection of Zaros buff, giving extra Archaeology XP, mattock precision and an increased drop rate in certain areas. This collection also only requires level 25 to complete. Infrequently finished collections like Bandosian III, Magic Man and Knowledge is Power all have high level requirements. 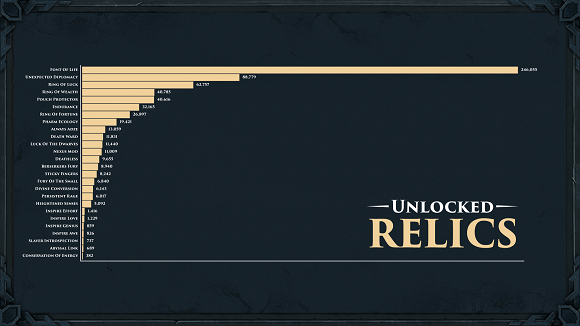 We can tell by the number of players that have unlocked the Font of Life relic that 246,055 people have completed the tutorial for Archaeology as of April 27th. 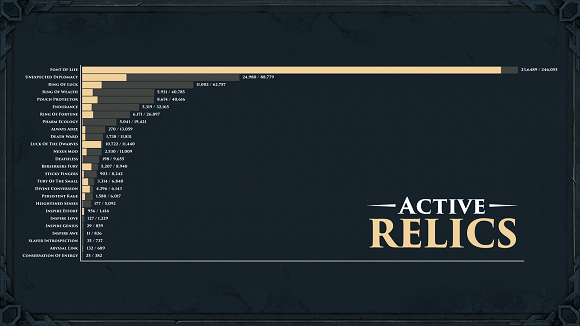 Almost all of the players that have unlocked Luck of the Dwarves are using it; only about 700 users who have the relic don’t have it active. It’s also one of the biggest investments that people can make in terms of spending money, meaning they’re more inclined to use it. 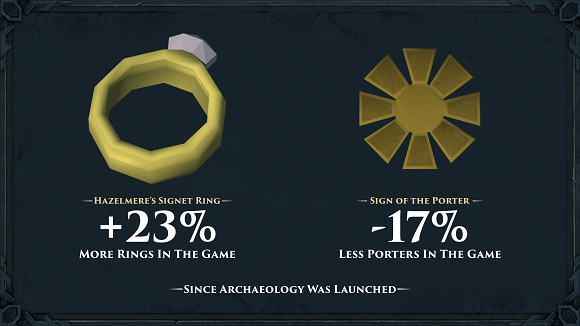 Generally, items slowly enter the economy because they stay on a player’s account. It’s rare to see such a big decrease, as we have here with Sign of the Porter. This also means that as a result of the amount of porters used, more hazelmere signed rings come into game.

It’s now a month after launch, so we’re revealing the drop rates for some of the items in the Archaeology skill. 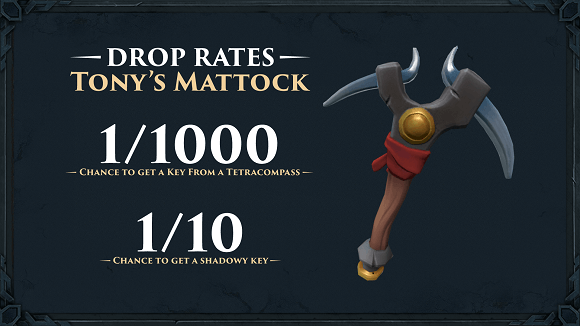 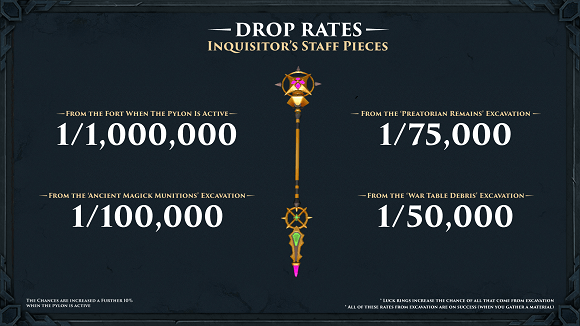 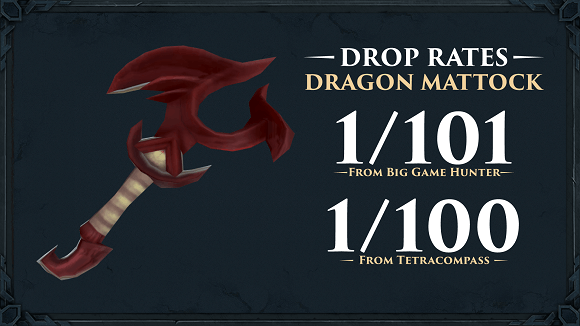 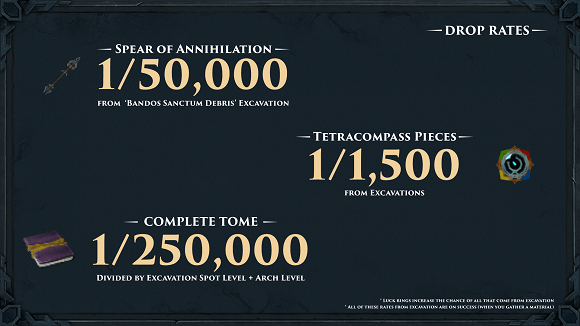 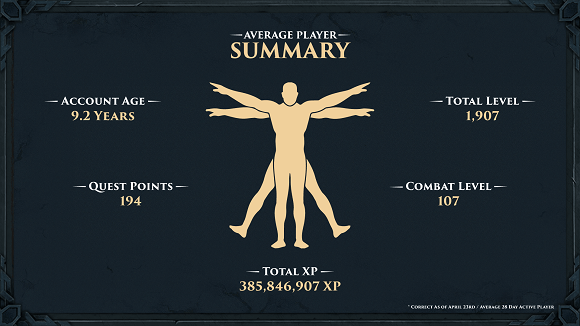 For this, we’ve counted players that had been active within the last 28 days and that we’re certain isn’t a bot or doing anything dodgy. These numbers are only for members. 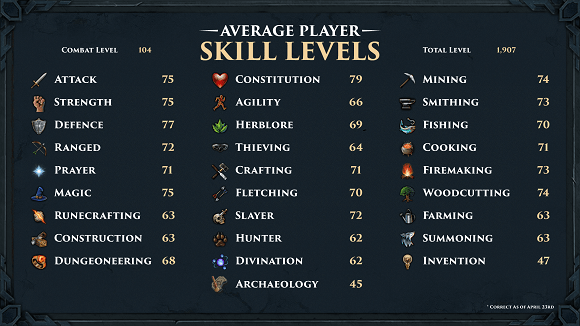 This is as of April 23rd and includes Archaeology. Of course, the average level for that skill is slightly higher now. It doesn’t count virtual levels, either. The reason for a skill like Farming – which goes all the way to 120 – having a relatively low average is that returning players might not bother engaging with content like player-owned farms. 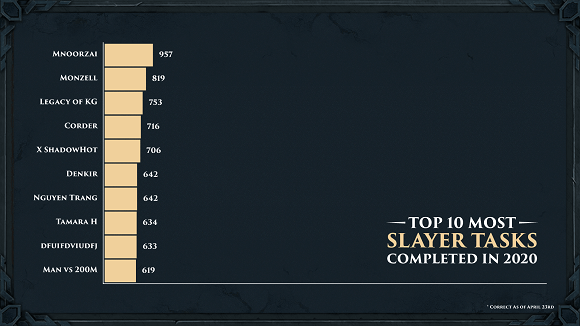 This is between January 1st and April 23rd, 2020. On average, these players complete around ten Slayer tasks per day. 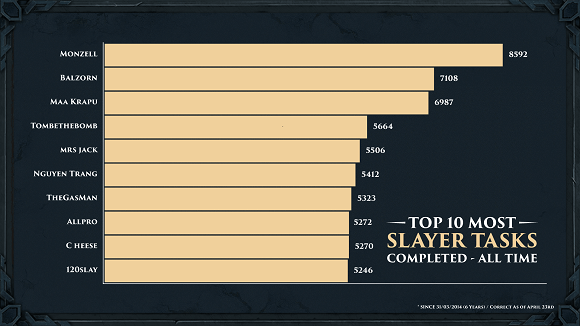 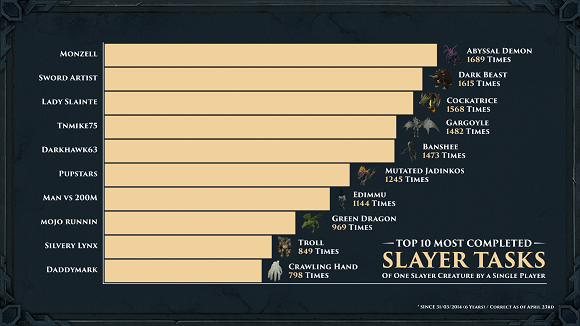 Here we looked at the players that have completed the least-repeated Slayer tasks the most times. 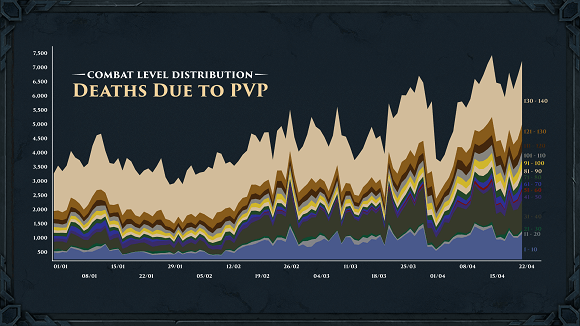 On April 22nd, around 6,000 people died in PvP in both the Wilderness and the Duel Arena. It’s mostly low-level players dying in PvP, though there is a chunk of high-level users, too. The reason why so many players between levels 31 and 40 die in PvP is because this is the stage where they are likely to wander into the Wilderness. 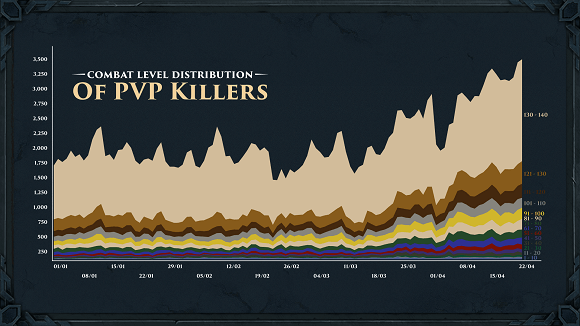 A PvP killer kills, on average, kills 1.75 people per day 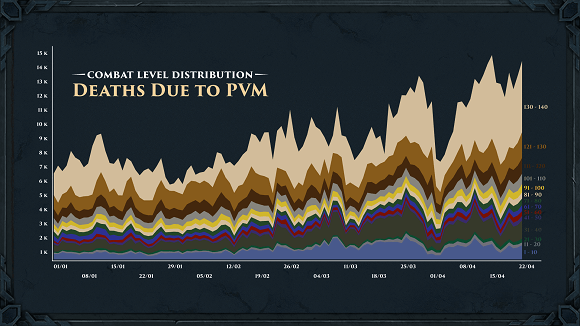 On average, 0.75 people per die to the cow every day. On April 16th, three people were killed by the cow, while on March 2nd a player with a combat level of between 130 and 140 died to a cow. A chicken kills fewer people than a cow – only one person every four or five days – though they did manage to take out someone with a combat level of between 80 and 90 on March 27th. We have questions.

Nex kills 450 people each day, on average, while 150 players die to the Abyssal Demon on a daily basis. The Highway Man kills two people per day, on average, though most of their combat levels are between zero and 10. The Ripper Demon kills 250 people per day at the moment, though this has increased due to Archaeology. Before that skill launched, it killed 160 people per day. Telos kills 250 users daily, though all players that die to this boss have a combat level of between 130 and 140. 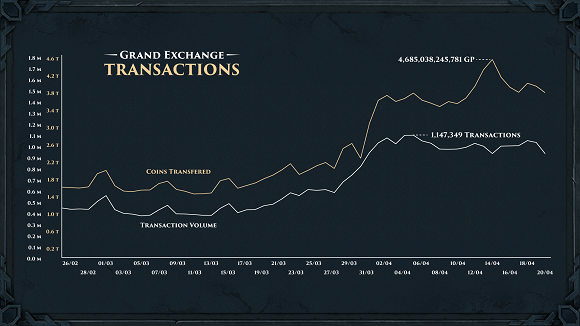 On Tuesday, April 14th, there must have been a number of high-value items sold on the Grand Exchange, given that the transaction volume dropped while the number of coins transferred spiked, with 4.7 trillion choices changing hands. This might have been when the Archaeology buying hit its peak, with users selling dragon mattocks and buying inquisitor’s staff pieces 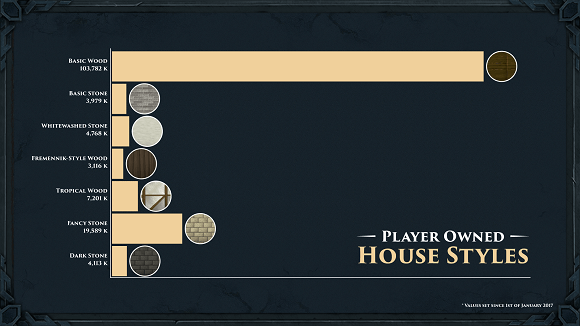