Over the last week we have had a survey where you can tell us how you feel about several key issues the community are facing. Here are the results: 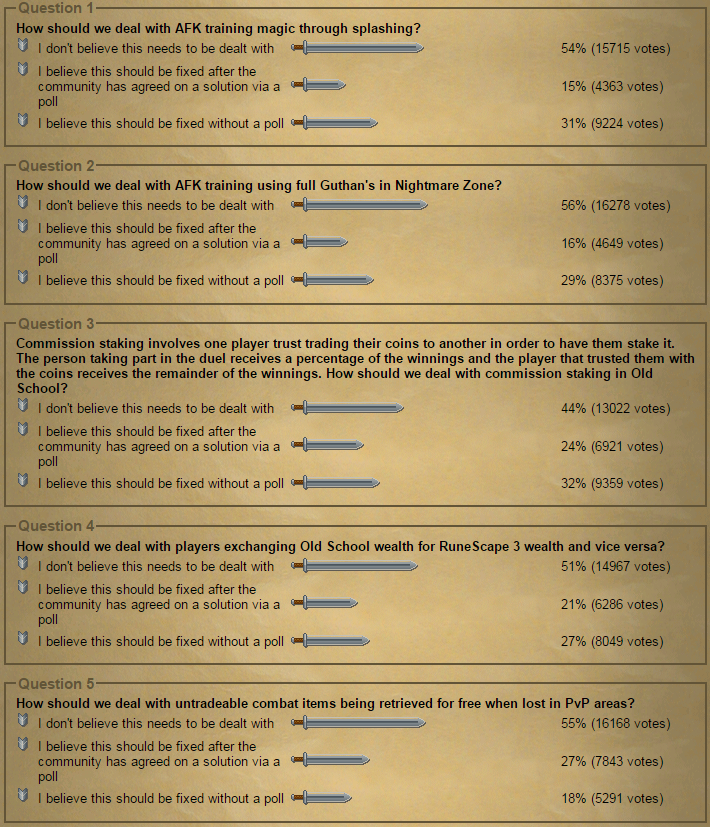 So, what can we see from these results? The overriding thing that we can see is that there is no consensus within the community as to how we should deal with these issues. Due to this we need to make a decision on how to proceed with each issue. Below we hope to explain why we have taken the decisions we have.

The key issues we had to consider when it came to splashing was that it has always been a part of Old School, however until the random events were removed it was something which wasn’t appealing to players. Of course, there are those who think that splashing should remain as it is an easy way to level magic. However, we think that if everyone could get 99 magic easily any future update to the magic skill would be redundant.

Out of all the options, AFK training using Guthans in Nightmare Zone received the least amount of support to be changed. There are two things we had to consider which we believe make this a significantly differently to splashing. Firstly, the account you need in order to AFK in Nightmare Zone requires significant investment in terms of levels and equipment to take advantage of this.

Secondly, we have polled numerous changes specifically to combat this and all have failed to pass. As such we think it is unwise to make a change without it passing a poll. We are more than open to poll good suggestions so please do let us know if you have any.

We have been running numerous investigations into the commission staking and the FCs which surround these. Over 60% of the bans that we currently make for Real World Trading come from activity related to commission staking FCs, these may be the hosts, owners of the FCs or just players taking part. Currently we have removed over 10 billion gp from these accounts which is destined to be traded.

The premise of players being able to give their friends money who will stake it on their behalf is something which is really positive and not something we want to discourage. However, we cannot ignore that organised commission staking FCs are acting as a front for Real World Traders. As such from now we will be considering anyone being part of a commission staking friends chat (that is hosting, participating and advertising) as involved in real world trading.

In effect, commission staking is now against the rules.

Off the back of this, we have redesigned the report abuse screen to include a new option to report other players that are harassing you.

Although this process is unofficial it does give a service to players who want to play Old School using bonds. Currently about 8% of Old School players use bonds and we think it would be unfair to stop them being able to do this.

Untradeable items in the Wilderness

With this issue we didn’t see an overwhelming desire for us to change anything. If you die in level 20 wilderness you drop all untradeable items as gold which seems to be a good middle ground. However, if anyone does have ideas for ways to improve this, please let us know.

Some unusual chickens have appeared in Lumbridge. How strange...

Discuss this update on our forums.