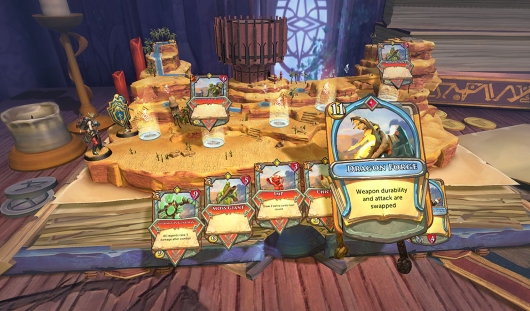 Hearthstone's success is hard to ignore in the industry, and it doesn't take much effort to connect the dots between that title's growth and Jagex's decision to develop an in-game card battler for RuneScape. The UK-based studio announced that it's making Chronicle: RuneScape Legends to be played inside of its popular MMO.

Chronicle takes place inside a "magical book" that challenges players to use deck-building to create quests that can be completed through PvE and PvP card battles. "Your opponent will be creating quests in parallel with you, but watch out as they might try to steal your weapons or gold," the website states. "At the end of your quests you do battle, with the last person standing the victor!"

According to Eurogamer, Jagex has been working on Chronicle since the beginning of the year to be released sometime in 2015 for the PC, Mac, and mobile devices. Chronicle is currently accepting beta sign-ups.