It's been one whole year since we released Old School Mobile! To celebrate, we've transformed the fountain at Varrock centre into a giant cake! Make sure to pay it a visit and grab yourself a slice.

Bounty Hunter Beta: Hotspots
We've added 13 hotspots scattered across the Wilderness to the Bounty Hunter Beta. One of these will be active at any given time, with its border marked by glowing orbs. Killing your targets within these hotspots will yield much higher rewards than usual.

To be eligible, you'll need a minimum combat level of 50 and to be carrying a Mysterious Emblem of any tier. Bounty Hunters will receive messages when a hotspot is due to change at 10, 5 and 1 minute before.

For a normal target kill, you'll receive 3, 4 or 5 BH points depending on your killstreak. If you kill your target while in the hotspot, you'll get triple points. Bounty tasks will also give 30 points instead of the usual 10. This bonus does not apply to the milestone points.

If you have a killstreak of 2, killing your target in the hotspot will upgrade their emblem as well as your own. Usually, only your emblem would be upgraded and the target's emblem would be destroyed.

While on a killstreak of 3 or more, both you and your opponent's emblems will be upgraded upon a kill in the hotspot.

The hotspots will rotate between the following locations: 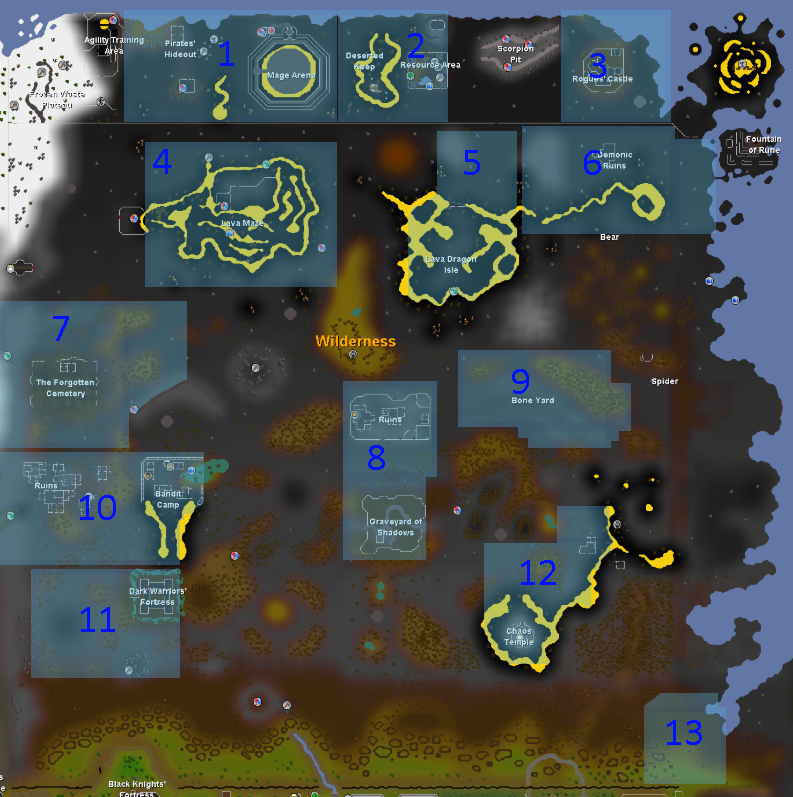 Loot crates have been added to the Emblem Trader's shop. They cost 5 points each and contain a variety of PK-ing supplies and occasionally an Ornate Maul Handle or Mysterious Emblem of any tier. We're also giving you 500 points to spend whenever you log into the Beta to test out the crates and let us know what you think!

Bounty Hunter players will now be a assigned new target within 1 minute. This is down from between 1 and 2 minutes.

The Emblem Trader will now look for Archaic emblems in your Bank as well as your inventory. This change affects the live game.

Halloween would not be complete without a black cat or two! Check out these Bob the Cat and Evil Bob limited edition pins on our merch store!
In Other News
The PvP World rota is switching over to Period B. On the east of the Atlantic, the Standard PvP host worlds are W25, UK and the F2P PvP world (W71, UK). On the west of the Atlantic, the host High Risk PvP world is W37, USA.

The members-only Last Man Standing world is now world 492 (USA), and will return to world 317 (UK) in two weeks when Period B ends. Similarly, a non-members LMS world has moved from world 169 (USA) to world 326 (UK) for the duration of Period B.