After three weeks of testing and tweaking, the Bounty Hunter rework has been added to the live game. We'd like to thank everyone for participating in the Beta and giving valuable feedback.

Although we're officially re-opening the minigame, we'll continue to monitor feedback and make adjustments as required.

For anyone who missed the Beta, here's what you can expect from the new version of Bounty Hunter:
Points and Reward System
Points and Killstreaks

Bounty Hunters now receive Bounty Points for killing their target. Killing several targets in a row will begin a killstreak that awards more points. Currently, you'll receive 3, 4 or 5 points per kill on killstreaks of 0, 3 and 10, respectively.

Bonus points are also awarded for milestone kills (separately from killstreaks) as seen in the table below:

10 points are also given for completing optional tasks, or 'Bounties' that cycle every 30 minutes. The tasks you receive will be limited to what is possible on your account and can be skipped for free up to three times a day. Your tasks will change every 30 minutes - you must wait for the time to deplete before receiving a new one, even if the current Bounty is complete.

Most Bounties involve killing your target with a handicap, offering extra rewards to Bounty Hunters who are skilled enough to complete them, while giving less experienced ones a better chance of winning their fight.

A button for checking, skipping and enabling/disabling Bounties can be found in the new Bounty Hunter interface.

The new Bounty Points can be spent on rewards from the Emblem Trader's new shop. This contains all the items found there previously (re-costed for the new system) and these additions:

Unique Rewards
We hoped to offer some unique rewards for Bounty Hunter. Unfortunately they didn't pass the poll, so they haven't been added. However, we're very much aware that the polling system hasn't been working well in instances where many of the voters don't engage in the content. We're considering alternative ways of offering such updates; perhaps by limiting access to the poll to only those players who've recently engaged with similar content. We're aware that such a requirement could be farmed, and so we'd have to require that the activity had taken place within a window of time before each relevant poll. This way, players hoping to farm the requirements in order to spite vote will have to continue to put in effort each time.

As part of this, we'd commit to designing such updates to minimise their impact on players who weren't invited to vote in the poll. For example, a new PvP weapon might be usable only in PvP.

But these new polls wouldn't just be about PvP. Boss content and skilling content could potentially be treated in the same way.

This may not be the right solution for Old School RuneScape, though, and we're open to alternative approaches, including working with a council of players to guide the designs in the first place.

We'll put out a survey in the coming weeks to see how the community feels about this sort of thing. If it's acceptable, we hope to use it to offer more fitting rewards for Bounty Hunter.


Mysterious Emblems
Those of you who had Mysterious Emblems from before this update will notice that they have begun to crumble and are now known as Archaic Emblems. They can still be used to access the old version of the Emblem Trader's shop.

To upgrade a Mysterious emblem, you'll need to kill a target who is carrying an Emblem of equal or higher tier. When you do, your will go up a tier (doubling in value) and theirs will disappear. High risk, high reward!

When carrying an Emblem in the minigame, the interface will show if your target is carrying an Emblem that would make you eligible for an upgrade. If the target will not allow you to upgrade, you can skip them without a penalty, giving you the option to prioritise targets with Emblems that match your tier.
Hotspots
During the Beta, we introduced a player-suggested mechanic called hotspots. These are zones, distributed throughout the Wilderness, that activate on rotation every 30 minutes. To be eligible for hotspot bonuses, you'll need a minimum combat level of 50 and you'll also need to be carrying a Mysterious Emblem of any tier.

If you kill your target in the active hotspot, you'll earn triple the Bounty Points from both the kill and any Bounties you complete.

While on a killstreak of 2, killing your target will cause up to 3 of their Emblems to upgrade and be dropped on death.

While on a killstreak of 3+, killing your target will cause up to 3 of your Emblems to upgrade (instead of the usual 1) as well as up to 3 of theirs.

Both of these effects occur regardless of the usual emblem upgrade requirements.

Below is a map of the potential hotspots. Since the Beta, the ones at the Bone Yard and the south-eastern wasteland have been replaced with three new ones: 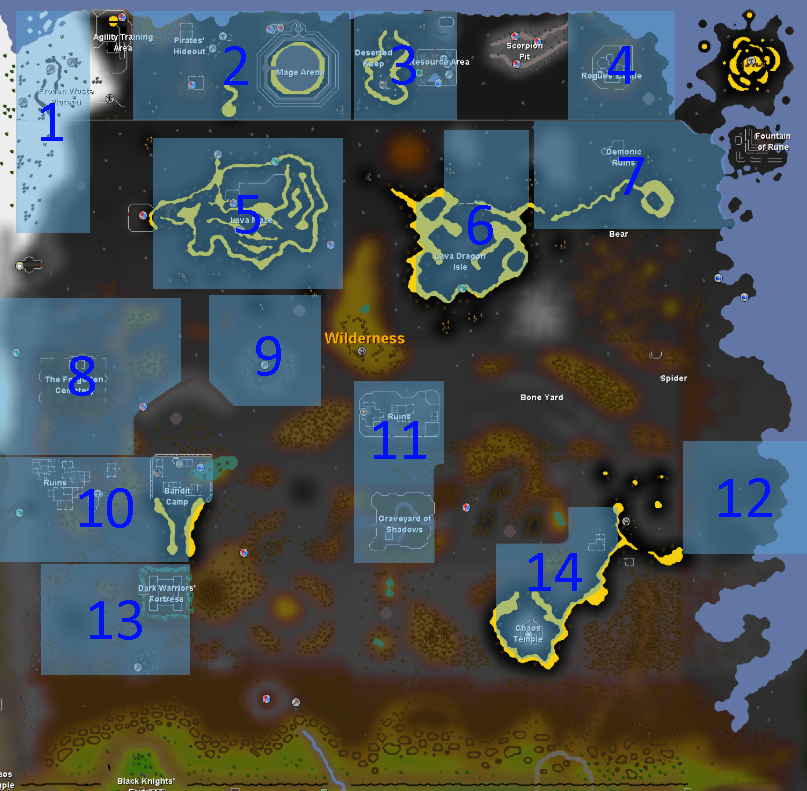 The hotspots range from low to deep Wilderness and contain both multi and single-way combat zones. The rotation selects multi-combat zones less frequently than single-combat zones to ensure a fair balance of each.
The Bounty Hunter Interface
The minigame's interface has been updated to fit the new mechanics. It still contains your target's display name, combat level, rough location (Wilderness level range), plus the skip and minimise buttons from before. However, it now has: The minimap now has a locator arrow that points to the general direction of your target. This is to help you hunt them down in addition to the Wilderness level range shown in the interface.

We hope you enjoy this updated version of Bounty Hunter and look forward to your feedback!

Twisted League
The first iteration of OldSchool RuneScape Leagues is arriving next week. The Twisted League will be open from Thursday November 14th to Thursday January 16th. Prepare to immerse yourself in an all new game mode where you complete tasks on Kourend and Kebos to gain points, unlock powerful Relics, and earn rewards that you can display proudly in the main game.

Note that the update next week will take place one hour earlier than usual (10.30am GMT with the standard 30 min countdown). The Twisted League worlds will become available from 11.30am GMT.

Are you prepared? Here are some Twisted tips: Want to know more about the Twisted League? Check out the reveal blog.